Call 911: Beck, Armitage, & Stevie Ray Vaughn Out of the Blue

If I were to say that Jeff Beck is one of the great rock and roll guitarists, thousands or millions of people would be outraged that I did not name him as the single greatest. And here is one of the great rock songs, “Going Down.” If you like this kind of music, the guitar work is extraordinary. Frankly, I am at risk of not completing this poetry blog post, because I want to play this over and over, just listening and appreciating. But, isn’t there a flaw with the song–I mean, what about the lyrics?

In rock and roll, to have that much singing in a song, you’d think there’d be room for something more, some more depth. These words are okay. They give a background to feature the intrumentation with. And we get it about the going down part. So okay, but, on the other hand–just okay. Yet and still, the song remains amazing, if you’re into this kind of music.

What does this have to do with poetry, and Simon Armitage? For the 5th anniversary of 9/11, Armitage has a film-poem coming out. It’s called Out Of The Blue (the link is to his blog where the poem is, and here’s more blogging about it).

I love the technical virtuosity, and his musical ear in the poem. If you like this kind of poetry, it is remarkable. A minor downside is that it reads at times like he had T.S. Eliot ambitions while writing it. That’s okay. This post ends with Jeff Beck being joined by Stevie Ray Vaughn. Unreal!!–though SRV may be the only guitarist who honestly can do a great tribute to Hendrix. So, the “tribute” aspect of Armitage’s poem is forgivable, if existent for a given reader.

Isn’t there a real flaw with the poem, though? In the Richard Brooks article, Poem for 9/11, by the laureate in waiting, in the last Sunday London Times, Armitage is quoted as saying, “I wanted to do something which was both commemorative and elegiac, but not political.”

If Armitage is going to load his character with thoughts of someone, anyone, in the Towers five years ago, why load his or her mind with section three? Here’s some of it:

Is it shameless or brash to have reached top,
just me and America
ninety floors up?

Is it brazen to feel like a king, like a God,
to be surfing the wave
of a power trip,

a fortune under each fingertip,
a billion a minute, a million a blink,
selling sand to the desert,

ice to the Arctic,
money to the rich.
The elation of trading in futures and risk.

Here I stand, a compass needle,
a sundial spindle
right at the pinnacle.

Under my feet
Manhattan’s a simple bagatelle, a pinball table,
all lights and mirrors and whistles and bells.

In an e-mail, I wrote this to him a few nights ago:

The problem is in Section 3, where your character goes into a hubris situation, but also where he has ideas that truly a normal worker wouldn’t. For instance, a salesman would not really sell ice to the Arctic per se, but would look for where there was a need a fill it. An individual worker is not concerned with millions in a blink–his next $500 commission, or Friday’s paycheck with the $120 in overtime maybe.

Your risk becomes that a legitimate read is that the poet is saying that this type of thinking in your section 3, is representative of what the thousands who died were going through. My initial read was simply that you were showing how the greatest a human society can create or has come to, can become dust in moment. I suggest making this statement some other way than by making it part of your character.

Therefore, early in the poem, that character is no longer human, but representative of something social, and what follows is a comeuppance, and legitimately a political alignment because the murderous and destructive events were human-made. Of course, I do not think you mean for this to be the case, or that you believe this, but this is how the poem can be read and so will be, and maybe, therefore, should be.

Possibly, the video production will make up for his banker/ghost saying these things or having these thoughts five-years hence. On the other hand, loading a representative character with those words might bring such a poet as Armitage down quickly, especially one commissioned as a laureate-in-waiting. Look what happened after Amiri Baraka’s Somebody Blew Up America, and Armitage’s poem is debuting on an even wider stage than Baraka’s.

We’ll see. In the mean time, I can enjoy his great riffing with the language. First, though, let me hear that Beck/Vaughn guitar duet one more time. 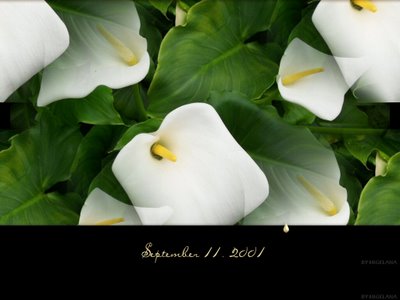 One way to commemorate 9/11 is with a Desktop Theme called “In Memory Sep 11” by Ingalill Colbell at Themes You Have Never Seen Before (Page 5).

And by the way, I organize my themes using Desktop Architect.

This site uses Akismet to reduce spam. Learn how your comment data is processed.